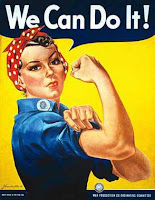 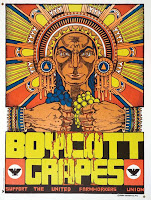 Political posters, like the ones shown, often have a clear message to be brave, to speak out, to have hope, "We can do it!" or in the case of the United Farm Workers grape boycott, "Si se puede!" These posters were effective calls for reform and revolution.

Recently I have been drafting a call for art submissions, on behalf of 3.1 Venice magazine, for a poster project revolving around the idea of non-violence as activism. It is part of a much bigger editorial mission to provide possibilities to promote peace on a local level.

During the course of writing the submission guidelines I realized that the artist's statement - the thinking behind the imagery will be almost as important as the image itself. I wanted to address the recent violent events in Boston and (closer to home) Santa Monica, California with images that reinforce the desire to live peaceably.

I researched images that had a significant impact upon our culture - images that we used as a rallying point - images that create change because they are so compelling people share them willingly. The saying, "a picture is worth a thousand words," is accurate when promoting a desire for change. Sometimes more can be said with one well designed political poster than a thousand word editorial. Art allows for a fluid exchange of ideas on a conscious and subconscious level.

While thinking about the series of articles for the next issue of 3.1 Venice, I began to see the symbiotic relationship between art and activism. The public seemed numb to the recent shootings at Santa Monica College with my friends and colleagues barely posting comment about it. But what could we say that hadn't been said? What change could we effect by talking about it? Which lead me to think - how do we empower ourselves?

The images of Martin Luther King, Nelson Mandela and more recently Occupy Wall Street creating social change through non-violence was a goal, an ideal. I don't pretend to have the answers but art is a powerful tool to create awareness and perhaps rally people to action - if you display a poster that is so compelling, so beautifully designed, so brave, so intelligent that you can't help but speak about it, post it and share it then, that art has become a catalyst for change.

This is certainly not a new idea - it is just a good idea. We are a society in crisis and the average person wants to find their voice, they want to create positive change, they want to live in a peaceful world. We simply have different ideas about how to achieve that. But if the teachings of the great leaders of the non-violent protests have shown us anything it is that answering violence with repression or more violence only perpetuates a cycle of destruction. We need to change our thinking – to do that, we may need to be still for a moment and take in the inspired thinking of an artist with a message.

The Collective Consciousness of "I" 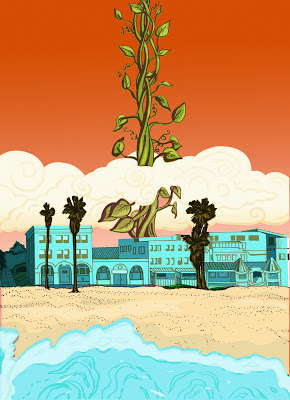 I can use "I" with a sense of humility because I was the instrument for the idea. Much like giving birth to my daughter - I have a sense of bringing her into the world and having guardianship over her but what happened after that was her destiny, not mine.

I just happened to have the skill set the universe required and it used me to get the word out. But the idea came through me like a Japanese bullet train. Four weeks ago it was a conversation at the local coffee shop, a statement of conviction, "I am starting a magazine." Four weeks ago, it was an impulsively bought domain name, 3point1-venice.com and a temporary web site proclaiming an arbitrary release date of May 25th. There was no particular reason for that date (and I missed it by five days) except to proclaim to the world that "I" was starting a magazine.

But the power of conviction is what convinced me that my little village of Venice Beach, California, was interesting enough to warrant a magazine – after all, there had been two before me. The publication and the website came fully realized and in four short weeks the universe ushered to my door everyone and everthing I would need to make this a reality.

The theme of the first issue revealed itself very quickly and it certainly was not what I would have thought if you asked me at the beginning of this journey. The very first interview, with a wonderful urban farmer, Matt Van Diepen, led to an entire issue built around the farm-to-table movement here in Venice. Each story lead to another and the discovery of the people who make our community unique. We have musician Finian Makepeace talking about Mycorrihzal Fungi and his dreams for a community garden, a profile on the modern ukulele band The Ooks of Hazzard, and a piece about Chance Foreman's film, One Day in Venice. There are other stories – The Learning Garden and the Seed Library, and interviews, art, video, photography. Everybody had something to say! All of these stories emanated from the 3.1 square miles we call Venice.

But it's the design process that was affirmed and revealed during the creation of this publication. The idea that I could be so deeply involved with the subject matter, that I could have a vision and be the guardian of it was a renewed experience. I have been here before but it has been awhile and I'd forgotten how intoxicating it can be. This project was a joyful coming together of all my skills in one place. Today, three days post launch, I am exhausted from all the joy.

I found myself in the middle of a process of collaboration, discovery, invention and communication that was energizing and inspiring and I am reminded why I love publication design so much. There is a bit of withdrawl now because it is a heady experience to bring something to fruition that was just a dream four weeks ago. But every time I look at the sixty pages of original content and the list of talented contributors, I am in awe of how creative humans can come together to build something more powerful than the singularity of it's parts.

Even though I started this post with references to "I", "I", "I" – I am ending this post as the collective "I." Think of the Borg of the Star Trek series. They were individuals all tuned into one mind – this is the "I" I am referring to. Collective Consciousness driving many people towards one binding mission. In this instance it was to create, even for a moment, a sense of community and awareness that you are not alone in the world. "I" is also "eye" when spoken, so the use of "I" with reference to a magazine could be interpreted as "I see."

View the first issue of 3.1 Venice at issuu.com